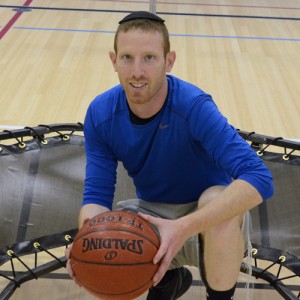 Zone190 inventor Tamir Goodman, dubbed “The Jewish Jordan” by Sports Illustrated in 1999, is a former professional basketball player who has become a successful entrepreneur, coach, educator, and motivational speaker.

During high school, Goodman was ranked among the top 25 recruits in the country, and he garnered national attention after averaging 35.4 points per game his junior year, all while remaining faithful to his Orthodox Jewish upbringing. He achieved additional notoriety after being named MVP of the prestigious “Capital Classic All-Star Game,” an award won by players like Shaquille O’Neal and Lebron James. Tamir went on to make history as the first Jewish basketball player to play D-I college and professional basketball, while faithfully wearing a yarmulke on the court and without playing on the Jewish Sabbath.

After the Sports Illustrated article, Goodman was featured on 60 Minutes, ESPN, CNN, Fox, and others, and was covered in The New York Times and The Washington Post, among many others.

Despite receiving a full scholarship to play at The University of Maryland, Goodman accepted a scholarship to nearby Towson University, whose schedule could better accommodate his religious beliefs. The first freshman to start at the school in over a decade, Goodman was presented the coach’s award for his performance on the court and in the classroom.

In 2002, Goodman fulfilled his dream of moving to Israel, signing a three-year contract with Maccabi Tel Aviv and serving in the Israeli Defense Force, which is a requirement of all Israeli citizens. Goodman played in Israel and again in the U.S. until injuries forced his retirement in 2009.

Since retiring, Goodman has established his reputation as a sought-after motivational speaker, coach, and educator. He has coached more than 3,000 basketball players around the world, and has partnered with Houston Rockets small-forward Omri Casspi on a series of basketball camps around the U.S. He is also the cofounder of Coolanu Israel, which strengthens ties to Israel through innovative seminars, sports programs and literature projects for athletes, college students, and coaches.

The author of “The Jewish Jordan’s Triple Threat,” which ESPN’s Mark Stein called “captivating,” Goodman has invented numerous sports products, including Zone190. He holds a B.A. in communications, and lives in Cleveland with his wife and four children.

Tamir is confident that Zone190 will be your complete basketball training solution. Watch his videos to see specific examples of drills and skill-building available through the Zone190, or buy one now.